Is ISO 15189 accreditation really the gift that keeps on giving?

Is ISO 15189 accreditation really the gift that keeps on giving?  Yes, for the assessment cartel.  No, for labs.

These authors developed the methodology used by Wilson et al. and showed rather similar results to the microbiology setting accredited to ISO 17025 by UKAS.

Non-conformities identifed by audits were unlikey to affect quality:

Audits identified fewer non-conformances each year after accreditation was awarded: 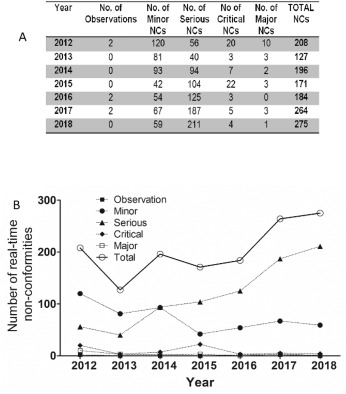 Auditing failed to diminish the number of real time non-conformances but few were critical or major:

Fig. 3. Numbers and severity ratings of real-time non-conformities by year. The total numbers and assigned severity ratings of all real-time non-conformities documented between 2012 and 2018 were gathered. Raw numbers are shown in table format (A) and are additionally displayed graphically (B) to illustrate observed trends. Severity ratings are based upon departmental criteria. Observation = A finding warranting clarification/investigation to improve the quality management system; Minor = A minor deficiency or lapse in discipline; Serious = An incident had the potential to have a negative clinical impact or cause a serious technical error; Critical = An incident that would have had clinical impact on a patient, but was stopped prior to having done so; Major = An incident in which there was clinical impact on a patient.

The authors conclude that audit is a poor and inefficient means of quality assurance.

This strikes at the heart of ISO accreditation because the planned internal audits are supposed to validate the annual audits that assessors for which assessment bodies charge fees.

To conclude, the high proportion of non-compliances deemed to be unlikely to have any important effect on QoS indicates that continued auditing for conformity with ISO 15189 (2012) standards may be an inefficient and largely unavailing approach to further improving the QoS in clinical laboratories with a mature QMS. Accordingly, there is room for improvement in the audit process required for compliance with ISO 15189, to promote more efficient and effective use of time and resources to better deliver and sustain a high QoS. There is also need to define better indicators of QoS which could allow the value of compliance with such quality standards to be more meaningfully assessed to enable delivery of a high QoS conducive to the provision of excellent patient care.

Go to Practical Laboratory Medicine and read this paper to see further evidence that accreditation is a confidence trick void of the proof that could establish its claims.

This validation of the earlier paper points other researchers to investigate further.

However, a suggestion that audits or other QoS indicators can usefully be done better is an example of  what John Seddon has described as “doing the wrong thing wronger”.  It makes nothing better and appeals to obsessive and controlling personalities.