Accreditationism as neo-mercantilism (or as the opium of the cartel)

Mercantilism was the economic policy of the colonial nations from the 16th to the 18th centuries.  The doctrine was that government regulation was essential for each nation to dominate trade.  The economy was believed to be a zero-sum game.  It had yet to be realised that free trade has the potential to create greater wealth and perhaps spread it more widely. Laissez faire economics replaced mercantilism before another descent into government regulation and Keynesianism from the late 19th century.

Mercantilism favoured large colonial populations of labourers, consumers and soldiers.  However it subsisted on a surprisingly small civil service. This foundation ensured that the nation’s exports exceeded its imports of finished goods and that its bullion reserves were plentiful.

The Navigation Acts of 17th century England attempted to control the costs of trade by requiring that English ships be used to carry goods traded in the colonies.

Similarly today, EC legislation, and cartel trade missions oblige goods traded by China to carry the inspection cartel’s branding.  The cartel could therefore be considered as a remnant of trading syndicates such as the European (currently EC) East India Companies.  Today, trade is allegedly facilitated when goods carry the ISO badge.

Britain objected to the Chinese accumulation of silver and forced Indian opium on the Chinese markets.   Opium trade brought enough bullion back to British, European, and American banks to correct the trade imbalance. The policies triggered a series of opium wars in the 19th century.  These Wars For Drugs were more real than modern War On Drugs policies.

Today western powers continue trying to exploit China.  It is a source of strong price competition and is a valuable candidate for the parasite of accreditation.  The country is capable of manufacturing extremely high quality products, but also some of very unpredictable performance.  The Chinese recognised the inconsistency of many of their own products.  For many years they sought high quality British brands, buying ISO containerloads of second-hand products Britons had been told by their pundits were outdated.

Even buying the brands themselves when the products failed to compete in their home market.

These tastes have left the Chinese vulnerable to the inspection cartel which is successfully selling them the ISO metabrand as a proxy for quality.

Accreditation is a confounder that most will find difficult to disentangle from more valid sources of quality.  Much of the growth in accreditation that the cartel reports is actually due to growth in China and to agri-food and bioscience accreditation enforced by EC legislation.  Elsewhere it is declining as companies realise its problems.

Like the inspection cartel, drug companies need to be watched closely for deception.  However, clinical trials are required of them.  Some are even made public.  Properly planned and analysed trials can distinguish confounding associations between events coincidental in time.  We keep returning to the question, why then do many doctors and scientists accept accreditation without any evidence at all?

Is market analysis ever conducted thoroughly enough to reveal whether accreditation has made any contribution to the quality that a customer attributes to a product?  For example, an improvement in some areas after accreditation does not mean the improvements were caused by accreditation.   They may simply be an association that has another cause.  The improvements might have been achieved more cheaply without the burden of accreditation.  An organisation with the resources and discipline to maintain accreditation could probably use these to achieve similar ends more intelligently, as Toyota have done.

But, again like a drug, accreditation is a treatment that the cartel wants you on for life.  It’s always making things better, but never better enough to stop submitting to it.  The first inspection is far from free; so it’s not an illegal drug.

The BSI/ISO management standards were foisted on Britain as a supposed answer to superior engineering from Japan, Germany and the USA that used fundamentally better systems of management and engineering.

The problem with British industry was not lack of record-keeping but poor labour relations and misallocated resources through years of bad government.  The superiority of other nations came from better ways of managing new technologies, quality processes, and people.

Accreditation is a form of worldwide tariff.  For every accredited Chinese manufacturing success sold anywhere in the world, money flows back to the cartel in Europe. 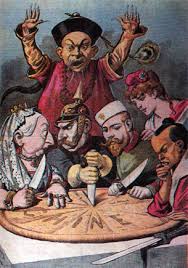 Emerging markets need to recognise the error of the outdated ISO management standards for controlling and keeping records of human actions and calling it quality.

Fortunately any wars on the horizon will probably not be quality wars.  Cartel members have seen that Chinese use of bureaucratic central control as a prophylactic against chaotic rebellions precedes Mao.  They expect it to be fertile ground for plying the ISO inspection swindle.  But the Chinese are smart enough to wake up and realise they can use better methods of delivering quality without paying the West for the ISO brand name.